How to Treat Constipation | Self Healing Techniques Series


Constipation causes are multiple. The major ones are irregular diet, inactive way of life, side-effects of diseases or because of drugs taken to deal with those diseases, heredity, etc. There is much written about the causes.

What everyone wants to know is the best way to get rid of constipation. Most available solutions suggest taking one drug or another, some working better some worse. The main issue with any drugs is that your organism gets used to the chemicals and with time they become less and less effective. Increased dosage usually leads to new health issues.

In this article I’d like to suggest a very simple holistic solution that doesn’t involve medicine at all.

On figure 1 you can see a projection of the Large Intestine onto a palm of the left hand according to Su Jok theory in the basic corresponding system.

On figure 2 we can see the direction of the fecal masses movement.

Take a massage stick or any other suitable subject for example a ball pen without ink or simply use any finger of the right hand and find painful points on a projection of the Large Intestine (See figure 1). Carry out massage of these point in any way.

After that carry out massage of the Large Intestine in direction pointed on the figure 2. Massage can be done by hand or with a massage stick. Put a finger (or the stick) in the area of the beginning of the Large Intestines (cecum), then slightly press and move a finger (stick) in the direction shown in figure 2 up to an output from intestines (an area of a rectum). Return to the area of cecum and repeat the movement. Do that repeatedly for 3-5 minutes.

In this step you are going to use Moxa to heat up the area corresponding to your Large Intestine. Light up moxa and bring it close to the area corresponding to the large Intestine. Keep it at distance of about 1cm (?”) from the surface of the skin. Apply the heat moving Moxa along the Large Intestine path in the direction pointed on figure 2. Do this procedure till your skin gets slightly red (but be careful not burn your skin – if it’s too hot move Moxa away and then try again).

Attach seeds of a watermelon, melon, apple or grapes using a band-aid or some other alternative as it can be seen on figure 3.

Pay close attention to the arrangement of the seeds. Leave those seeds in place for 24 hours. If water gets onto the seeds, simply replace them with new ones and use a new band-aid. Repeat this procedure three times during one week (.e.g. do it every second day).
If you have a chronic constipation it’s highly recommended to address the cause of this condition, rather than the symptom. You can do that by paying a visit to a specialist.

I treated quite a few cases of a constipation so far. Here is one of them.

The aim of the treatment was to increase the Heat and Wind energy and to reduce Dryness energy in structure of Large Intestine ( figure 4 ).

An addition I made an acupuncture on projection of the Large Intestine on the palm in a direction corresponding to movement of fecal masses as shown on figure 5. 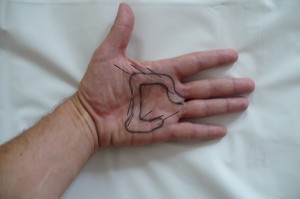 Even before the treatment was over the patient had an urge to have a bowel movement.

See also How to Relieve Constipation with 4 Simple Body Movements and Squatting.

If you liked this self-healing technique, Self Healing Series has more self-empowering materials.


One Response to “How to Treat Constipation | Self Healing Techniques Series”